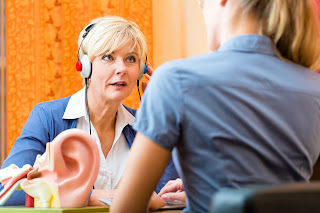 An individual might suffer from mild, severe, moderate or profound hearing loss, which might affect one or both ears. A hearing loss which is greater than 40 decibels in adults, and more than 30 decibels in children, is referred to as disabling hearing loss.

Men exhibit a higher propensity to suffer from hearing loss, compared to women. (Clarke, JW, & Blackwell, 2012). Around 15% of the American adults, who are aged 18 and above; report trouble in hearing, according to the statistics reported by the National Institute on Deafness and other Communication Disorders (NIDCD).
Also, around 2 to 3 children out of every 1000 babies born in the U.S., suffer from hearing loss which is detectable. According to a research conducted by the NIDCD, around 15% of the Americans who lie in the age bracket of 20 to 69, suffer from a high frequency of hearing loss, which is caused by exposure to noise at work or during other activities.
Furthermore, according to a survey study conducted by the NIDCD, around 2% of the adults who are aged from 45 to 54 are reported to have a disabling hearing loss. This rate for the occurrence of hearing loss is seen to elevate to 8.5% in adults who are aged between 55 and 64. The study also revealed alarming statistics that around 25% of individuals aged from 65 to 74, and 50% of those aged 75 or older, had reported suffering from hearing loss.  (National Institute on Deafness and other Communication Disorders (NIDCD), 2015)

Hearing loss might be caused due to hereditary factors, medical negligence, delay or lack of timely treatment, complications at time of birth, and contraction of a severe disease at an early stage in life.
Hearing loss is calculated based on the decibels which are audible to an individual. This congenital abnormality is assessed through a set of audiologic tests, which include acoustic admittance measurement tests, hearing history, and other physiological and behavioral procedures.
Sophisticated testing procedures like auditory brainstem response, Otoacoustic emissions, behavioral observation audiometry, speech and conditioned audiometry and visual reinforcement audiometry are used to determine the level of hearing loss in an individual. The tests are conducted based on the age of the patient. (Shamesh)
The basis for measuring the degree of severity of hearing loss is:

The traditional nuclear income family dynamics are changing in the industry, with both parents working full time, and leaving the children in day care or with relatives. Divorce rate in the country has also risen to 50%, and the changing family structural dynamics are reported to have a great impact on the work of auditory professionals, who identify, diagnose and treat hearing loss in children and adults.

Low income families have children that are more vulnerable to suffering from hearing impairment, due to the lack of proper and timely medical care. (Rhodes & Perigoe) These families also often lack the resources to provide their children with the required medical care and treatment needed for improvement.
Amongst the minority groups within the country, the number of children reported with a rising percentage of hearing loss cases has been highest in the Spanish community. 11.5% of the total households, which were identified with cases of children suffering from hearing loss, belonged to Spanish families. (Rhodes & Perigoe)
Certain ethnic groups are also identified with a higher number of hearing loss cases, which is attributed to consanguineous marriages. (Rhodes & Perigoe) Around 49% of individuals diagnosed with hearing loss belonged to different ethnic groups, out of which 15.4% are African American, 4.3% are Asian Americans and 24.5% Hispanic American. (Rhodes & Perigoe)
Over the years, there has been a rising trend observed in the number of reported cases for hearing loss, all across the country, which is seen as a major cause for concern by experts.